The Top 100 is a blog series where I rewatch and rerank the movies that were in my Flickchart top 100 at the beginning of the challenge. I'm watching them in a random order to be as unbiased as possible in terms of reranking.

It's been... a long time since I did one of these blogs. Frankly, that was because part of me was worried to rewatch this movie -- my original #44, Rent. I was a devout Rent-head as a late teen, early 20-something, and I still enjoy so much of the music, but in the back of my mind I kind of had an inkling that this was going to fall out of favor on a rewatch. But then I reminded myself that I thought the same thing about Beauty and the Beast and it ended up actually climbing two spots, so who knows?

Rent was the 2005 movie adaptation of one of Broadway's most-loved musicals. Its creator, Jonathan Larson, died tragically from a brain aneurysm on opening night, so he never got to see how much his show meant to so many people. It latched onto something in the culture and put that on stage with music, and it became a massive hit. The movie version came out nine years after the Broadway version hit and, with the exception of Tracie Thoms as Joanne and Rosario Dawson as Mimi, the entire Broadway cast reprised their roles.

It tells the year-long story (or possibly two years, I am always slightly confused by the chronology) of a group of broke friends in New York in 1989-1990. It's an eclectic group: a 19-year-old exotic dancer, a songwriter starved for great ideas, a philosophical hacker and his drag queen lover, an aspiring filmmaker still getting over a breakup, his flighty activist ex, and the down-to-earth woman she left him for. We also see glimpses of their former comrade who has married into money and now is firmly on "the other side," as far as they're concerned. Half the characters have AIDS, two of them are or were drug abusers, all of them have some great songs.

Before we get into the full review, here's my live-blogging take on it. As always, spoilers ahead! 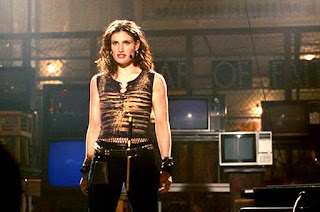 My initial thought was that this wasn't going to have quite the same impact that it did on me 5-10 years ago when I first fell in love with the show and then the movie came out. My initial thought was right. I still think nearly all of these songs are good on their own, and a few of them are even meaningful within the context of the movie, but I found, to my surprise, I didn't connect with any of these characters anymore. Roger is self-righteous and mopey, Mark is constantly indignant about basic adult things like having to pay rent and get a job, and, well, let's not forget that Maureen is the worst person ever and Joanne deserves so much better.

Collins and Angel are easily the most likable characters. Of all the people who could be indignant about the deal life's handed them, they cope with it the best. There's a reason everyone rallies around Angel's funeral toward the end -- Angel was possibly the only one who showed any compassion for anyone else. Everyone else is too wildly self-obsessed, too busy interpreting the line "No day like today" as "I shouldn't have to do anything I don't want to do." If anyone but Angel (and maybe Collins) had died at the end, would anyone have positive things to say about how they had impacted the world around them? No, probably not.

I'm not surprised that this worldview shifted for me. Even back when I loved Rent, I kind of sensed that I might grow out of it eventually. I will say, while the movie (and, I'm sure, the show) doesn't hold as well together narratively as well it used to, I still love the music. These are some incredible songs. And these are good performers performing them. The songs just primarily work best outside of the context of the show, with the exceptions of "I'll Cover You (Reprise)" and "Will I?" and, to a lesser extent, "One Song Glory," all of which actually benefit from the plot in a way most of the others do not.

As a string of interesting songs, huge thumbs up. Everyone should buy the soundtrack. As a whole... not as successful. Certainly not successful enough to stay in my top 100.

So I guess let's kick it out.

vs. The Artist (2011) - The Artist is a bit higher than it really should be. I admired it more than I liked it. It was bold and interesting but failed to really make an impact on me emotionally. While Rent doesn't make quite as big an impact on me as it used it, I still found moments of it very moving. Rent wins.

vs. Garden State (2004) - Another movie that is probably too high. I saw Garden State ages ago and it would probably drop significantly if I rewatched it. Rent is fortunate it ran up against this one. Last time, my third-choice movie was Whiplash, and I don't know if Rent would have won against Whiplash. It does here, though.

vs. Se7en (1995) - All right, here's where it stops. Ten years ago, Rent would win this easily (and clearly did when I began my Flickchart), but now I'd rank it below. The Rent soundtrack still goes above Se7en, but we're not ranking soundtracks versus movies, so Se7en wins and bumps Rent down to #156.

vs. Horrible Bosses (2011) - ...Well, this is kind of awkward. I don't know which to pick. Both have high highs and some pretty draggy lows. I think Rent has fewer draggy lows, thanks to its music, so I guess it goes above Horrible Bosses for now. I'm not sure that's the right choice, but it's where it goes.

vs. 28 Days Later... (2002) - We're getting quite a lot of horror movies pitted against Rent. I think a lot of 28 Days Later's strength is in its first 20 minutes or so, which are spectacular, but not quite as spectacular as Rent's best moments. Rent wins.

vs. Conspiracy Theory (1997) - This was one of the earliest thrillers I remember watching with my dad when I first started getting seriously into movies, and I still think it's a lot of fun, but I think I have to give the point to Rent here.

vs. Sabrina (1995) - Oh, this is a tough call for me. I love the remake of Sabrina. I haven't seen it in awhile, but I suspect that if I were to rewatch this today, it'd still have the same impact on me, whereas Rent definitely diminished. I think because of that I am going to give Sabrina the point. 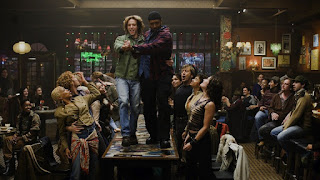 This drops Rent from #44 to #205, which feels about right. I can't drop it too far out of the top of my movies. I loved it so much 10 years ago, and even if I don't connect with the characters anymore, there's still the matter of how incredible the music is. Seriously, people. Buy the soundtrack. Buy it now. And then learn all the words to "La Vie Boheme" and feel cool.

It's time to choose my next movie from The Top 100, which I will be writing about definitely no earlier than July 20, but probably significantly later. Did you see how long it took me to do this one? Anyway, next time's Top 100 movie is my original #21, West Side Story (1961). Rewatch it along with me or watch it for the first time and you can chime in with your comments when I finally get around to reviewing it.
Posted by Hannah K at 9:30 AM No comments: