Album #149 is Alicia Keys' debut album, "Songs in A Minor," recorded and released when Keys was very young. She started work on it at age 17, though she was 20 when it was officially released. I already knew three of these songs very well: Fallin', A Woman's Worth, and How Come You Don't Call Me, so I removed those from the rotation to focus on ones I don't know. I've put them back into the final list in their correct ranking. In order from least favorite to favorite, these are the "Songs in A Minor." 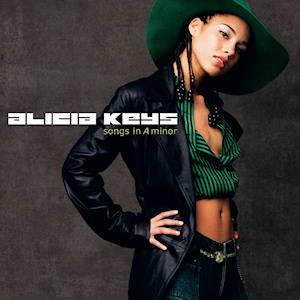 16. Piano & I - This went immediately because it's not really a song, it's a spoken-word intro.

15. Goodbye - The songs at the bottom of the list are almost all for the same reason: they just bore me. There are several slow, languid, energy-less songs on this album that blend together in my mind. This was the one that stuck with me the least.

14. Butterflyz - I'd heard this one before but didn't register it very much. I still don't. It's not very interesting.

13. Caged Bird - While I like the lyrics a little bit more than the ones that fell below this, it's still not appealing to me musically. I like the idea of tapping into a more melancholy feel for these lyrics, but this music isn't melancholy so much as plodding.

12. Rock wit U - Despite having heard this song five times by the time I removed it from my playlist, I still couldn't remember how it went. Time for it to go.

11. The Life - Most of the ones after this at least have a thing or two I like about them. Most of them are upbeat. This is the lowest-ranked upbeat one, and it just didn't do much for me.

10. Why Do I Feel So Sad - I love the chorus for this song, but Alicia's voice sounds especially weak throughout, and it grates on me a bit. The chorus saved it for awhile, but eventually this one had to go.

9. Jane Doe - Kind of a catchy song, and it's fun to sing along with, but it doesn't really stand out.

8. Mr. Man - There's a weird sort of wispy sound to this whole song, and it's interesting and different in comparison to the rest of the album. Definitely it kept me listening for awhile. It's out now because the lyrics are strange and do nothing for me.

7. Troubles - I kind of sort of knew this song before I started listening to this album, but I didn't like it then and I liked it more now. There's a cool dark sound to it, and singing solemnly about "letting your troubles go" is much more interesting than trying to force a positive sound into that.

6. A Woman's Worth - My least favorite of the ones I already knew, but it's still pretty decent. They definitely chose some of the stronger tunes on the album to be the singles. It's slinky and bold and interesting.

5. Never Felt This Way - This is the saddest, loneliest love song ever.

4. Lovin' U - Almost all of my favorite songs on this album had a more old school R&B sound. This one I enjoyed a lot every time I heard it, but I kept forgetting it existed, otherwise it probably would have landed higher on the list.

3. How Come You Don't Call Me - The second of three songs I already knew. I like that, unlike many of the slower songs on this album, this one's got a bit of swing to it.

2. Girlfriend - More typical modern R&B than most of the songs at the top of the list. I think I'm most intrigued by the range Keys shows in the chorus vocally. It all sounds so natural until I try to sing along and I realize she's doing much more than I can. It's sneakily impressive.

1. Fallin' - The first one I ever heard from this album, and by far my favorite still. It's the only one of these that I really love, and it showcases Keys' moody music, melancholy lyrics, and retro sound at their best.

I began with #150, "The Roches" by The Roches. I only knew one song by this band: "Come Softly to Me," which was one of my father's favorites and was featured in the film Crossing Delancey (one of my mom's favorites). It's a lot smoother-sounding than most of this album, which is more folksy and casual and sometimes awkward-sounding. But overall, I liked this album a lot. Here are the songs I listened to, ranked in order of when I kicked them off my playlist. 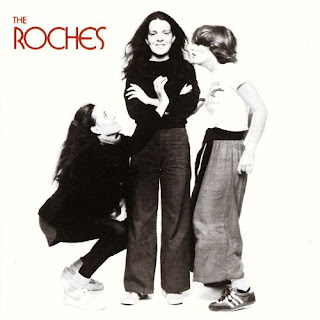 10. Damned Old Dog - The only one I actively disliked. It's kind of interesting lyrically, but some of those harmonies are really unpleasant to listen to.

9. Runs in the Family - You know it's a decent album when the ones I kick off just because they're boring are the second-worst.

8. Pretty and High - I never quite got into the feel of this song, but it has some striking moments

7. Quitting Time - This is a pretty little song, but the lyrics didn't interest me as much as the sound, so it fell a little lower on the list.

6. The Married Men - Here's where the decisions got difficult. I ended up being stuck between this song and my #5 for awhile and tossing it over to a music group I'm in on Facebook to be my deciding factor. This one lost. It's fun, though.

5. Mr. Sellack - One of the most interesting little songs I've heard about unemployment.

4. The Troubles - I initially thought this was going to be in my top three, but an unexpected late favorite pushed it out. I really like the bit at the end where they sing a little round of the most important word in each verse.

3. Hammond Song - This song just sounds *gorgeous*. Lyrically it doesn't grip me as much, and it's a little bit longer than I'd like, but the beautiful harmonies and instrumentation boosted it way up to #3.

2. We - Right from the beginning of this album, I knew I was going to have fun with it. It starts off with this cheerful meta-song introducing the sisters, explaining their back story, and sighing a bit about how they always get asked the same questions in interviews. It's delightful.

1. The Train - On my first listen through, I'd never have expected this to be my favorite, but the more I heard it, the more I kept connecting with it thematically. I don't take the train to work, but I definitely know the drudgery of a long commute and the desire to do something, anything, to break it up. I kept being struck by the line, "I am trying not to have a bad day," in the first verse. The thought process in this song is so familiar to me that I deeply related to it even with completely different circumstances.