Every so often I listen to an album that, no matter how many times I listen to it, just refuses to stick in my head. Album #139, The Bangles' "All Over the Place," is one of those. Reviews of this album call it "infectious" and compare them to the Beatles, but for me all these songs run together in the same nondescript vein. Add to that the fact that I find one of the vocalists borderline unpleasant to listen to, and this one didn't do particularly well for me. Here are the top 5 songs, though really these are all in "meh" territory. 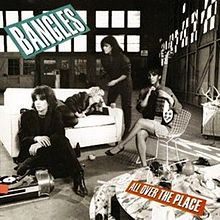 5. Restless. This is by that vocalist I don't like, but I kind of dig the lyrics, so this one made it up to the top five on the strength of those alone.

4. Where Were You When I Needed You. The one thing that draws me to this song is how much fun it is for an alto like me to sing. That "Wheeeeere" at the end of the chorus is in a really nice part of my range, which doesn't happen often with female pop/rock songs, so I enjoyed that.

3. Going Down to Liverpool. This one caught my ear the first time I heard it. It's a cheerful little tune that doesn't have a lot of substance but captures a carefree attitude that's fun to listen to.

2. James. Another early standout. I like that there's clearly a story behind this one, and listening to figure out what it might be is fun.

1. Hero Takes the Fall. This one probably grew on me the most out of all of them. It's got a cool dark sound to it, and I like the lyrics, and the vocals are pretty solid here. It's just a nice little groove. Nothing I'm super excited about but I wouldn't change the station if this came on either.

The Last 10 Books I Read (Alif-Arrangement)

1. Alif the Unseen by G. Willow Wilson. What a strange, fascinating book -- a mix of sci-fi and fantasy and myth and drama. Unlike anything I've read in awhile, and so well-written. 8/10.

2. All Quiet on the Western Front by Erich Maria Remarque. This is a heartbreaking story. It's so beautifully written and captures the slow breakdown of the narrator's mental state through the horrors of war. It makes me really want to see the film adaptation, which I'd never been particularly interested in. 9/10.

3. Ancillary Justice by Ann Leckie. This has become Jacob's favorite book series and he's been trying to get me to read it for forever, so I'm glad I got to it. And it's really interesting. It's got great worldbuilding and plot and is definitely interesting. I'm not sure I'm as sold on the characterization as he is, but, hey, I'm reading the next two books in the series, so we'll see if that changes! For now, 8/10.

4. Altered Carbon by Richard K. Morgan. This is a great concept for a sci fi story that then becomes one of the most tedious books I've ever read. So very disappointing. 3/10.

5. Anathem by Neal Stephenson. Wow, this was... a verbose read. There are parts of this that I really loved. I liked that it's like half philosophy. I liked the world of the avout, shut away from the world. But the second half of the book takes a turn that doesn't quite work with me, and it is a dense book to read. Like, it takes a lot of work. I'd say like... 5/10.

7. The Annotated Marx Brothers by Matthew Coniam. I'm a moderate Marx Brothers fan, and it was cool to get more info on the movies I knew as well as getting a better view of the scope of their full movie careers. It definitely made me interested in watching a few I hadn't seen yet as well. 7/10.

8. Ancillary Mercy by Ann Leckie. And I finished up the Imperial Radch trilogy. This is good stuff. Very creative and interesting, and it's an extremely satisfying finale. 8/10. Maybe 9/10 for the whole trilogy.

9. As You Wish by Cary Elwes. Just a moment-by-moment sharing of anecdotes of making The Princess Bride. This would not be nearly as interesting if I didn't enjoy the movie so much. I think the idea of including anecdotes from other people involved was also a very smart move and rounded out the story. 6/10.

10. The Arrangement by Sarah Dunn. What an interestingly-written book. These are compelling central characters, but there's so much of this story spent on characters I do not know or care enough about, and overall it kind of falls a little flat. 5/10.

Have you read any of these? What have you been reading lately?
Posted by Hannah K at 12:30 PM No comments:

Email ThisBlogThis!Share to TwitterShare to FacebookShare to Pinterest
Labels: books, the last 10 books i read

I've been alternating the albums in my Top 150 Albums By Women project with cast albums, so I'll share my favorite five from these as I listen to them as well.

I really only ever knew one or two songs from the Broadway musical adaptation of Shrek, so I figured I should listen to the rest of it. Let me say first off, this is not a good musical but it's a listenable cast recording because Brian D'Arcy James does all the vocal and emotional heavy lifting here, much like Ben Platt in Dear Evan Hansen. He sings each song so beautifully it's easier to overlook the cheesy lyrics and mostly-blah melodies. (Seriously, the creative team behind this show are so much better than this. What happened?!)

My five favorites, all of which I do enjoy at least partially:

5. This Is Our Story

My favorite thing about the Shrek story (and I do love the movie) is that it sets up a nontraditional female lead. Sure, she starts out pretty traditional, but by the end it makes the (super rare) point that a not-obviously-pretty woman can still find love and happiness. This song does a pretty good job of capturing the best part of that ending, even though some of the lyrics are pretty cheesy along the way.

While a LOT of these lyrics are pretty bad, the performance energy and upbeat music goes a long way to making it a fun one to listen to anyway.

This is a nice reprise because the original version began the show and set the tone of cynicism and having barriers against people, and this is just a lovely, vulnerable little tune of a character coming out of that mindset and professing his love, even though he's not sure it would work. Like I said, Brian D'arcy James really sells these moments!

So this one probably wouldn't land this high except I really, really enjoy the musical theatre technique where two characters each have an individual verse to sing and then they sing them both at the same time. Like, that's one of my favorite things and I love it way too much. (They do it in "I Think I Got You Beat" in this show as well, but that song also has like 45 seconds of burping and farting sounds, so... nah.) This one is just jaunty and enjoyable and fluffy.

I am in no way surprised that this won. It was the only one of these top five that I already knew, and I liked it a bit already, but it has the fewest awkward lyrics of the whole show and it allows Brian D'Arcy James to act the heck out of it and make me genuinely care about his character. It's the only one of these that I'm likely to actually add into my regular listening rotation.

Anybody out there really love this show? Or really hate it? Share your thoughts and your own favorites in the comments!
Posted by Hannah K at 2:30 PM No comments: