Album #141, Joanna Newsom's "Ys," was not available on Spotify, so we're skipping over that for the moment and moving on to #140, "Come Away With Me" by Norah Jones. So far, this album is tied with the Alicia Keys album for having songs I already know. I knew four of these already and really liked three of them. The album as a whole is very soothing, chill, dreamy easy listening. I ended up having a bit of trouble telling some of these songs apart, but I was definitely able to pick out a few favorites. Here were my top 5. 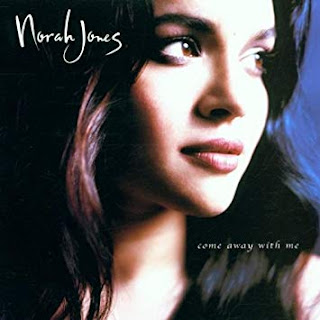 5. I've Got to See You Again. An early favorite that ultimately slid down the more I listened to it (I initially thought it might end up my #1). At first I think I was drawn to it solely because it was different from the rest of the album -- more robust, less wispy. Eventually, while I still enjoyed it, it slipped down a bit below a few others that I really loved. I still like the sound of it enough to toss it in the top five, but just when I thought I might get rid of one of the other four, this one made its way out instead.

4. Shoot the Moon. This one is the reverse situation of the previous song, in that I didn't care about it much at first, and it just kept growing on me. There's something beautifully sad and melancholy about it, and Jones' voice totally sells it. It's just a simple, pretty, sad song, and I like it a lot.

3. Cold, Cold Heart. One of the very few songs on the album Jones herself didn't write. This one was actually a Hank Williams tune that I knew existed but was mostly unfamiliar with, and I really enjoyed this introduction to it. It's equal parts playful and sad, which is a fascinating combination. Actually, that juxtaposition seems to be a theme for the album, because...

2. Feelin' the Same Way. This is one of the four I already knew. A friend put it on a mix CD for me years ago, and even then I liked how it was both happy and sad. It's sort of an upbeat tune. It sounds hopeful. But the lyrics really aren't, very much, and I like those two together. I especially like the melody for this.

1. Turn Me On. Another one I already knew, and I thought maybe it would slide down in my list because I knew it so well. But it only got better, and I found myself loving it more and more every time I heard it. It's so slinky and intimate and beautifully sung. I'm glad I got the chance to fall back in love with this song.

I've been alternating the albums in my Top 150 Albums By Women project with cast albums, so I'll share my favorite five from these as I listen to them as well. This time I listened to the 2016 Off-Broadway cast of The Robber Bridegroom (starring Steven Pasquale, who I like a lot). My five favorites!

5. Once Upon the Natchez Trace. One of those fantastic opening numbers that really sets the scene for what's to come -- in this case, by introducing all the characters and establishing the tall tale nature of the plot. It's fun and entertaining and a great opener to the album.

4. Nothin' Up. An early favorite, partly because it's so rare to find songs for women written for the lower part of my voice and I was excited for it! I especially love the contrast between some of those high wailing notes and the lower, cynical lines. A good one.

3. Deeper in the Woods. I like how different this sounds from the rest of this cast recording. While most of the music is upbeat, this is a haunting coral piece that I just grew to love more and more.

2. Marriage is Riches. This is not one that I expected to last this long, but it's just so delightful and jaunty and silly. The back-and-forth of all the characters wanting different things is all captured hilariously in the tone of the music, and it just kept making me smile.

1. Steal With Style. This was another early favorite. It's so much fun to sing along to, and it does an excellent job of introducing us to our main character. Steven Pasquale sings the heck out of it, too.

Have any of you listened to this one? What did you think of it?
Posted by Hannah K at 12:30 PM No comments:

The Last 10 Books I Read

I've been doing a pretty good job regularly reading books lately. I've nearly finished my first alphabetical read of everything on my Kindle from 2014 or before, and now I'm about to start my alphabetical read of everything I've bought on Kindle since then. So it seems like a good time to start a new blog series that hopefully I'll update every so often. These are the last 10 books I read and, very briefly, what I thought of them.

1. The Woman in White by Wilkie Collins. I somehow ended up with two purchased versions of this book, one illustrated, one not. I didn't have high hopes for it, as my only reference point was the really dull Andrew Lloyd Webber musical adaptation, which I saw on Broadway several years ago. The book is... a little better, but still not exciting in any way. I like how it switches back and forth between several different narrative points of view, but the narrative itself is somehow simultaneously both convoluted and tedious, and I never feel that it comes to a satisfying conclusion. 4/10.

2. You Never Can Tell by George Bernard Shaw. A play by the famed English writer. This had some good witticisms and some interesting commentary on relationships, even though it ultimately falls a little flat. 6/10.

3. Wuthering Heights by Emily Bronte. How on earth did this become some sort of symbol of gothic romance? The characters in this book are all awful people. Heathcliff is a cruel, abusive person, and Cathy is a petulant, spoiled brat, and they're never portrayed as anything other than such by the author, so how did it come to be known as anything like a love story? It's such an unpleasant narrative thanks to its repulsive characters. 2/10.

4. Sea of Silver Light (Otherland #4) by Tad Williams. I finally finished up my reread of the Otherland series, which is four very, very large books that I hadn't read in ages. By the time I got to this one, I was fully re-engrossed in the world and zoomed through it faster than the other three in the series, despite the fact that it's like 1200 pages long. I had forgotten how it ended and found it both fascinating and moving. 8/10.

5. The Absolutely True Diary of a Part-Time Indian by Sherman Alexie. Oh gosh, this is such an engaging read. 9/10.

6. Accidental Saints by Nadia Bolz-Weber. I do so like Nadia from her online presence but I'd never read a full book by her. I love how open she is about her shortcomings and how much grace she has for God to be working in the lives of people around her. 8/10.

7. Against the Twilight by Donald James Parker. Uh, so I don't remember why I had this on my Kindle. I feel like somebody I know asked me to read it and snark it for the blog. Unfortunately, while it's bad, it's not quite Rothdiener bad. There's some actually tense moments and none of it is written as incompetently as good ol' JLR's stuff. It is pretty terrible, though -- it's about a Christian guy convincing a woman who's written an incredibly popular vampire series that vampire books are demonic, and then you THINK they're going to get married, but nope, they each hear from God that they're supposed to marry someone else, so they quickly propose to that other person despite having not been in any kind of dating relationship with them prior. It's just right into engagement time. That's always smart relationship building. 1/10.

8. After Alice by Gregory Maguire. Why do I keep reading Gregory Maguire books? Next time I'm about to, somebody stop me. His prose is so pretentious I can't handle it. And nine times out of ten, his stories go NOWHERE. This is an example. Ugh. 1/10.

9. The 5th Wave by Rick Yancey. I remembered mildly enjoying the movie of this when it came out, and I mildly enjoyed this. The shifting POVs were pretty well done, the reveal is smart. It's not great characterization but it's a fun little post-apocalyptic YA book, especially if you have a fondness for that genre (as I do). 6/10.

10. All the Dirty Parts by Daniel Handler. Well, the title is correct, this book is pretty dirty, and at first I wondered if that was legitimately all I was going to get. But then it takes some interesting twists and turns emotionally as it goes on. I'm not convinced that I care for how it ends, but it's a surprisingly compelling journey to get there. 6/10.