My Top 6 TV Shows of All Time

For not having lived in a house with TV reception since I was nine, I sure have managed to watch a lot of random TV shows. Thanks to Hulu and Netflix and other websites offering TV series viewing, I've found quite a few shows that I've just fallen in love with. This is my list of my favorite 6 TV shows that have ever, ever existed, and why I love them so much. 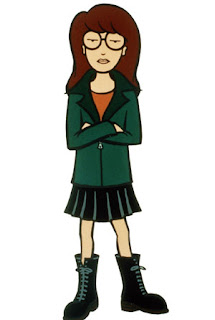 While Daria isn't always as brilliant a show as the others - sometimes the comedy doesn't work and the animation is awkward - when it works, it works perfectly. Above all, it really fleshed out an amazing female character, with a unique and interesting personality that made me feel, for the first time, that I was being represented on TV.

I've already written at length about why I love Daria the character in my article about TV girls who are most like me, and I mostly love the show because I love the character, so I'm not going to go into further detail about it, but instead move on to #5.

Favorite episode: "Write Where It Hurts." 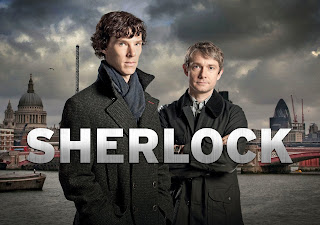 I have yet to show anyone the pilot episode and have them be anything less than psyched to watch the next one. Not all the episodes are great - the second in each season lags a little - but they're essentially full-length movies about, IMHO, the most interesting incarnation of Sherlock Holmes ever. Benedict Cumberbatch brings this modern version of the character to life, and he is fascinating every single second he is on screen. Martin Freeman is fantastic as John Watson - an extremely likable everyman who is quite intelligent in his own right but far overshadowed by Sherlock's genius.

I love watching the way they update the plots for modern audiences, but most of all, I love that this show made such great use of Benedict Cumberbatch, and that it got him noticed. He completely deserves it. He makes this show work.

Favorite episode: "A Study in Pink." 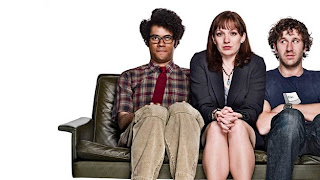 I do really enjoy my British comedies. I'm actually a little surprised this is the only one on the list. This is one of those shows where every episode gets funnier the more you watch it. The cast is absolutely incredible - I took a poll once asking me who was the funniest character. I couldn't pick between any of them, so I gave up on the poll. While Roy, Moss, and Jen are the backbone of the story as our protagonists, the supporting characters of Richmond, Denholm, and, later, Douglas, round out the truly hilarious cast.

There are only 24 episodes of this show total (4 seasons, 6 episodes each) and nearly every one is really, really, hilariously funny. There are really only one or two that don't make me go, "OH, YAY, THAT ONE" when I realize which episode it is. It's a much, much better nerdy show than Big Bang Theory - smarter, funnier, and kinder to the nerds among us.

Favorite episode: "The Work Outing." Though "Italian for Beginners" is a very, very, very close second. 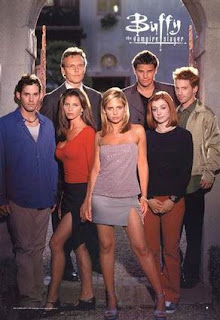 This is the longest-running show on my list. Generally shows that last beyond 3 or 4 seasons start going really downhill in terms of quality, or at the very least, are inconsistent across the board. While Buffy certainly has its ups and its downs as it gets into the later seasons, what makes it triumph over all the others is Joss Whedon's incredible character development.

All throughout the Buffy series, the characters' core stays the same. Yes, they grow. Yes, they change. But each change makes sense with who they are at that moment. When I go back and rewatch earlier seasons, I don't say, "Whoa, Willow was totally different at the beginning." I think, "Whoa, Willow grew a lot in the later seasons." As the characters encounter new situations, they react to it in a way their characters would, and it changes them in a way it would change their character. It's truly brilliant character consistency, difficult enough to get right in a movie, let alone a seven-season television show.

(And what other show could pull off a villain -> comic relief -> love interest -> volatile stalker -> redeemed hero arc so effortlessly? Seriously, that is my favorite character arc of all time. In any fictional universe.)

Favorite episode: "Once More With Feeling." 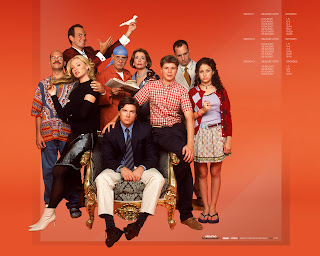 It's hard to think of a show with higher rewatch value than Arrested Development. There are so many little foreshadowing jokes and throw-away lines that it's simply impossible to catch them all the first time around. The more you watch it, the funnier it gets. I still occasionally get a joke for the first time, and I've seen the series probably four or five times all the way through.

The cast is wonderful. Every single cast member here is at their best. Though they're all funny in other projects, I have never liked any of the cast members as well as I do here. The string of guest stars and cameos is also hilarious, with frequent subtle digs at their real-life personas. (There are several jokes my mom didn't get when we watched it because she kept forgetting Ron Howard was playing the narrator.)

The cynicism and lack of likable characters may not sit well with some people, but I still say it's one of the funniest shows ever. Hoping as I rewatch season four, it fits in as well with the rest of the series in its cleverness. 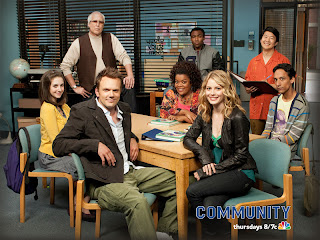 Oh, gosh. What is not to love about Community?

It was my third rewatching of the show that clinched it for me. This is my all-time favorite show. It is the most beautifully nerdy show out there, thanks to the genius of Dan Harmon, who was not afraid to say, "Hey, let's do a show where the entire premise centers around a mashup of Pulp Fiction and My Dinner With Andre."

Community's cast is amazing. Though my favorite characters are Troy and Abed, each character gets their chance to shine and be hilarious. From Shirley's self-righteous indignation to Pierce's continued attempts to be relevant to Britta's defiance of everything she deems oppressive, there are plenty of episodes that bring each character to the foreground. Some of these episodes even end up being oddly moving, despite the snarkiness and cynicism in the show. (Season four episode "Basic Human Anatomy" actually made me tear up a little bit.)

Beyond just a good cast, Community does something that other shows try and fail to do all the time: It makes perfect parodies. It captures the exact right feel of whatever it's tackling - everything from Ken Burns documentaries to Star Wars to Dungeons and Dragons to westerns to musicals to zombie flicks to video games to Law and Order... you get the idea. Generally I find parodies lazy and uninspired, but every time this show does one, it proves they don't have to be. Sometimes they even manage to squeeze several parodies into one - "Horror Fiction in Seven Spooky Steps" spoofs several horror genres in a row and does them all exactly as they should be done.

There's so much to love in this show. I'd argue season three is the most perfectly crafted TV season of all time. Out of 22 episodes, I love all but one, and even that one has grown on me significantly as I rewatch it. I have one friend (and you know who you are) who saw a couple episodes, didn't like it, and refuses to watch any further... and while usually I can understand people disliking the things I love, in this case I'm thoroughly baffled, because I honestly can't think of a single reason to dislike this show. (Well, at least not until we get to season four, where Dan Harmon was no longer involved, so it didn't really hit its stride until halfway through.)

If you haven't started watching this yet, DO IT. Catch up so you'll be ready for season five this midseason.

Favorite episode: "Digital Estate Planning." (And I'm pretty sure that's my favorite episode of any TV series, ever. Seriously. Pretty much anything Community has done, I think it's superlative.)

What are your favorite TV shows? Have you seen all of mine? What do you think of them?
Posted by Hannah K at 12:30 PM

Email ThisBlogThis!Share to TwitterShare to FacebookShare to Pinterest
Labels: tv