So I realized I have some however never recommended any podcasts on this blog. Or, well, I wrote about four favorites awhile back, but I haven't shared the huge amount of podcasts I subscribe to. It's too many, really. I have about 15 of them as actual top-of-the-priority list favorites where I listen to every new episode that comes out, and a LOT more that are just in the "when I run out of top priority, play any of the rest of these at random" list. I hit subscribe quickly and then hit unsubscribe when I realize whatever I'm listening to has ceased to be fun to me and I skip it more often than not.

Because I have so many, I'm going to do it like this. Here is a photo of the first 9 podcasts in my podcast app, alphabetically. I'll talk through this, and then later I'll post another 9. 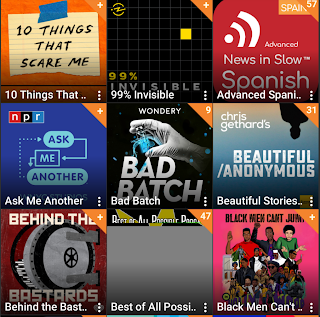 10 Things That Scare Me. A micro-podcast where a huge variety of celebrities share 10 things that scare them and talk a little bit more in depth about a few of them.

99% Invisible. Another very short one from the folks at RadioLab, about design choices you probably don't think about.

Advanced Spanish (News in Slow Spanish). One of several podcasts I added to help me practice my Spanish. This one's like a 5-minute news blurb in Spanish. I like it because it's short.

Ask Me Another. An NPR game show that I first started listening to because Jonathan Coulton co-hosted it, but turns out it's just great.

Bad Batch. A terrifying short series about a bad batch of stem cells that caused longterm damage for a lot of people.

Beautiful Stories From Anonymous People. Anonymous people call comedian Chris Gethard and talk to him for up to an hour about whatever they feel like. He's a wonderfully empathetic listener and interviewer and makes every guest seem specials.

Behind the Bastards. I just recently subscribed to this one on someone else's recommendation and haven't gotten a chance to listen to it yet, so... *shrug*

Best of All Possible Podcasts. A theater in Virginia gives table reads to unproduced 10-minute plays and then talks about possible ways to stage them.

Black Men Can't Jump in Hollywood. This one is newish to me as well, but it's a group of black men discussing mainstream films featuring black leads and dissecting them. The couple episodes I've listened to are fascinating and funny and it's good to hear perspectives other than my own on film!
Posted by Hannah K at 12:30 PM

Email ThisBlogThis!Share to TwitterShare to FacebookShare to Pinterest
Labels: podcasts